I’ve Been Watching Too Much CNN

I was thinking about ‘grace.’

And then I started thinking about ‘Grace.’

Like the name, ‘Grace.’ My niece is named ‘Grace.’

‘Grace’ was a name my husband and I considered if we had a daughter.

But then his sister named her daughter ‘Grace’ and we didn’t have a daughter.

That happens to me a lot where I really like a name and I think ‘I’d use that name if I had a kid.’ And then someone I don’t like names their kid that name.

Then it’s tainted. I can’t use that name any more.

Except of course my niece is not tainted.

‘Electa.’ That was another one I really liked. I got it off a headstone in a graveyard.

‘Grace’ is what we say when we are thankful.

‘Thank you for this food we eat.’

‘Grace’ is something a dancer has. Movement.

But wait, she can speak gracefully too.

So ‘grace’ is a state of being. Elegant.

And then there is the whole God thing.

“The free and unmerited favor of god.”

To be in favor. A state of grace. 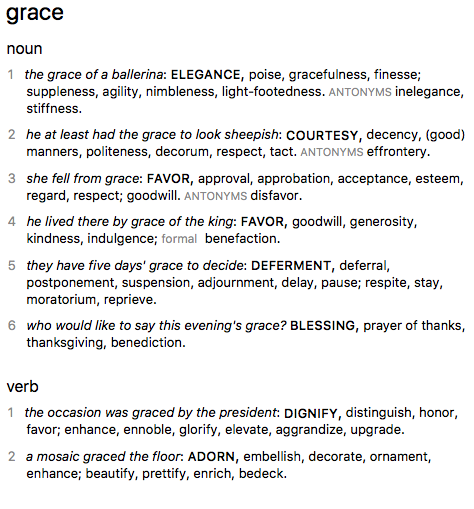 What am I trying to say?

I taught this leadership training.

I taught it based on the concept – not mine, but Airbnb’s actually – ‘commerce through human connection.’ We can, in fact, sell a product more effectively by paying attention to people and connecting with them first, not their purse first. Successful sales can be derived by seeing the customer as an individual, not by focusing on numbers as the drivers.

And as I taught this concept of truly not ‘selling’ people but rather helping people, I began to watch those in daily life that would sell to me. And then just everyone in general.

(Interesting, I was encouraged lately by my advisor, friend and coach, to observe. Observe in my life. Observe my life.

And no one says a damn word to them.

No one tells them how graceful they are.

No one tells them what a good job they are doing.

No one tells them how kind they are.

No one tells them what a difference they are making.

How much they are valued.

How much value they bring.

No one tells them.

And so I started to.

I told the attendant at Blue Bottle Coffee what a really careful and considered way she tended her customer, and how kind she was and thorough to explain the product and get the customer exactly what was best for them. I told her the company was fortunate to have her on staff.

I told the online support person who worked hard to solve my issue, who listened to my complaint and understood it was his job to listen and not his favor to me.

I told the scheduler for my dermatologist what a kind, and gentle, and thorough approach she had to dealing with my many schedule conflicts. I felt she, and by way of her service, my doctor, truly valued me as their patient and were grateful for my loyalty.

I told the barista at Starbucks that he was the fastest I’d ever seen at getting out the drinks and it was seldom like that in other Starbucks.

I told the young woman behind the counter that she was one of the most beautiful women I had ever seen.

I told the woman in the grocery who was being made to feel problematic because her state coupons were taking a long time to process that she had a lovely and patient son.

And I told the students in my class when they were insightful. And correct. And when they excelled.

I witnessed those individuals blossom. It was as if dawn broke through a cloudy sky.

The online support person was speechless.

The medical scheduler giggled and said, ‘well she tried.’

The Starbucks barista looked me straight in the eye and said, ‘it takes a team.’

The young girl behind the counter ducked her head and looked up thru her eyelashes with a secret smile.

The students in my class got better and stronger and more successful. And one of them went out and won a 40” SONY big screen TV in the first contest in which he participated in-store.

Maybe even that we are loved.

So we must say it, we must always say it. We must tell one another. Everywhere.

And by extension, we must take the time to send the text that says, ‘how are you?’

We must leave the voicemail that asks, ‘is that new job going okay?’

We send the GIF clip of the Pekingese rolling itself up in the blanket.

It feels good, I will tell you. To tell someone, ‘I see you. Thank you.’

It makes them better. It makes you better.